A WDM system uses a multiplexer at the transmitter to join the several signals together, and a demultiplexer at the receiver to split them apart. With the right type of fiber it is possible to have a device that does both simultaneously, and can function as an optical add-drop multiplexer. The optical filtering devices used have conventionally been etalons (stable solid-state single  frequency Fabry–Pérot interferometers in the form of thin-film-coated optical glass).

As there are three different WDM types, whereof one is called “WDM”, the notation “xWDM” is normally used when discussing the technology as such.

WDM systems are popular with telecommunications companiesbecause they allow them to expand the capacity of the network without laying more fiber. By using WDM and optical amplifiers, they can accommodate several generations of technology development in their optical infrastructure without having to overhaul the backbone network. Capacity of a given link can be expanded simply by upgrading the multiplexers and demultiplexers at each end. 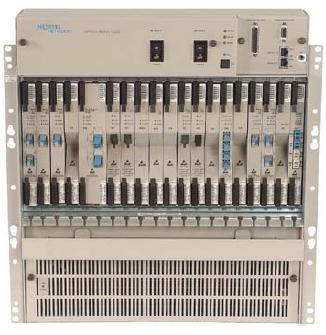 Coarse wavelength division multiplexing (CWDM) in contrast to DWDM uses increased channel spacing to allow less sophisticated and thus cheaper transceiver designs. To provide 16 channels on a single fiber CWDM uses the entire frequency band spanning the second and third transmission window (1310/1550 nm respectively) including both windows (minimum dispersion window and minimum attenuation window) but also the critical area where OH scattering may occur, recommending the use of OH-free silica fibers in case the wavelengths between second and third transmission windows are to be used. Avoiding this region, the channels 47, 49, 51, 53, 55, 57, 59, 61 remain and these are the most commonly used. With OS2 fibers the water peak problem is overcome, and all possible 18 channels can be used.

Dense wavelength division multiplexing (DWDM) refers originally to optical signals multiplexed within the 1550 nm band so as to leverage the capabilities (and cost) of erbium doped fiber amplifiers (EDFAs), which are effective for wavelengths between approximately 1525–1565 nm (C band), or 1570–1610 nm (L band). EDFAs were originally developed to replace SONET/SDHoptical-electrical-optical (OEO) regenerators, which they have made practically obsolete. EDFAs can amplify any optical signal in their operating range, regardless of the modulated bit rate. In terms of multi-wavelength signals, so long as the EDFA has enough pump energy available to it, it can amplify as many optical signals as can be multiplexed into its amplification band (though signal densities are limited by choice of modulation format). EDFAs therefore allow a single-channel optical link to be upgraded in bit rate by replacing only equipment at the ends of the link, while retaining the existing EDFA or series of EDFAs through a long haul route. Furthermore, single-wavelength links using EDFAs can similarly be upgraded to WDM links at reasonable cost. The EDFA’s cost is thus leveraged across as many channels as can be multiplexed into the 1550 nm band.